Kirani James wins Grenada's first ever Olympic medal in the men's 400 metres, bringing home a gold for the Isle of Spice! 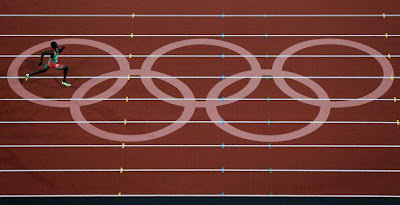 I'm no good at sports reporting, so all I can say is that tonight, 19 year old Kirani James was in a league of his own and I love him. Love. 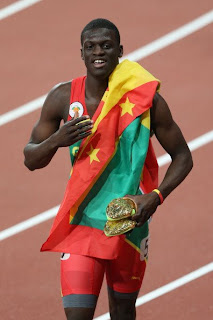 Such a proud day for Grenada!

If you'd told me a week ago that the next the topic to inspire me to get on here and actually write something would be the Olympics, I would have called you a liar. But here I am, completely swept away by the infectious excitement, emotion and passion of the incredible athletes I sit watching do more exercise in ten minutes, than I've done in my life. I have to admit, before the games I was a bit of an Olympic cynic. I've never really enjoyed watching or playing sport; often only encountering professional sport in the form of football in a pub surrounded by people shouting obscenities at a screen while I stared on blankly. I'd always considered the Olympics the biggest and most expensive sport event, but it is so much more than that. Guys...

It's sport, and I'm loving it

I am truly loving it! Ok, the fact that while expressing my love for the game I am inadvertently using the slogan of the healthy sports event's biggest sponsor ("ba ba ba ba baaa") reminds me of some of the problems I have with the economic organisation of the games. But, all problems with the attempted ownership of words aside, it has to be said in: I am loving the London Olympics 2012, and have never felt more glad to live in London than I do right now.

I've loved sitting on the grass in front of our local big screen and jumping to my feet with thousands of people when the unbelievable Usain Bolt crossed the finish line, getting his second Olympics 100m gold medal and holding onto the title. I've cheered on Team GB in events I've never seen before and learnt that two of the lifts in weightlifting are called the "clean and jerk" and the "snatch". I've cried watching Britain's Mo Farah win the  men's 10,000m, crossing the finish line  with style after twenty-five, TWENTY-FIVE, laps around the track. My favourite moment of the games so far has to be the grace and humility shown by Grenadian Kirani James when, after winning the 400m men's semi-finals, he swapped names with South African Oscar Pistorius, explaining in his post-win interviews that:


"He’s [Pistorius] an inspiration for all of us. What he does takes a lot of courage, just a lot of confidence. He’s very special to our sport. He’s a great individual and it’s time we see him like that and not anything else."

Speaking of Kirani James, my Grenadian heritage means that I am RIDICULOUSLY excited for the 400m men's finals this evening. Kirani is set to bring us home our first ever Olympic medal, and I have complete faith it's gonna be gold.

These games seem to have united the entire city, the entire country: cheering on Team GB and whatever other countries make up our cities cultural heritage. My initial Olympic Cynicism has completed disappeared in the face of the passion and accomplishment that the games celebrate. And regarding the criticisms about the costs/corporations involved in the games, a comment made on twitter by an excellent poet I met at university sums up how I feel:

I think human joy and human achievement is always worth investing in. # andthatsthat

The Olympic torch is coming to toown 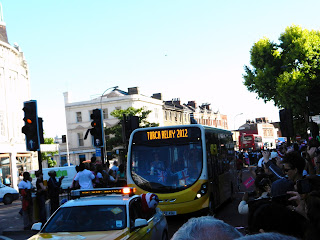 Well, to my corner of London to be exact, and by now it's long gone, probably off jogging it's way through Penge or Crystal Palace or some other fringe borough. Yes, today, the well-traveled torch hit my home borough in SE London! The torch bearer, flanked by an army of brands, was greeted by a surprising amount of flag waving people considering it dashed through at 8.20AM. Probably would have had a bigger reception if it'd visited a little later in the day, but the streets were still lined with people waving Mecca bingo and Samsung flags. Cheering in unison as all the Olympic sponsors drove past in their party vans. 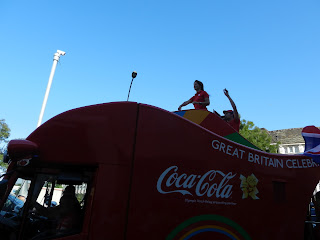 I saw Coca-cola and Samsung and Lloyds TSB (the bankers were not as good as motivating the crowd as the fizzy-drink and the phones) all with music blaring and pompoms shaking. My sister even got to have her photo taken with the 'Cash&Cheque Express' mascot! Look at those patriotic smiles. 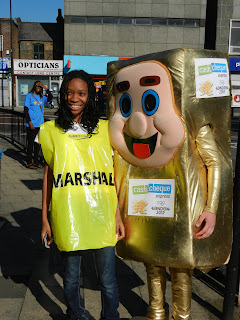 He had the London 2012 Olympic logo stapled to his back, informing us they'll be offering the highest prices for gold during the games... they also seemed to imply that this would in some way make GB athletes more likely to win, but didn't make the connection very clear. The volunteer Marshalls were looking equally as shiny as the stuffed gold bar in their fluorescent yellow plastic vests. They also got some pretty snazzy t-shirts, announcing their brand new status: 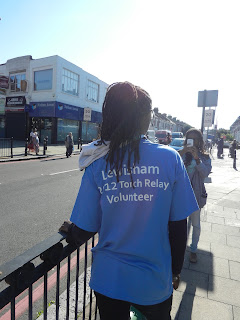 Our encounter with the torch itself was brief, but as it passed I heard a little girl tell her grandma "That fire's been all round the world!" and y'know what, at that moment I was really proud to be there to witness it. 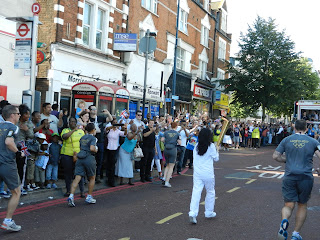 The atmosphere was lovely though. I think the last time there were this many people gathered in the streets cheering here, was during the riots last summer; it's wonderful to see people united to celebrate the positive things about our community. And KFC probably had the best 8.30am sales it's had all year... 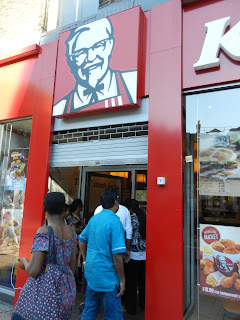 Graduation is over and done, I've said my final goodbyes to Norwich and I'm back home. It's been less than 24 hours. This morning, after 15 minutes of being stalked by my (generally lovely) sisters from room to room in a futile search for a quiet space to finish my book, it has been confirmed: there are more challenges to this whole moving home thing than making three years worth of stuff fit in my tiny childhood room.
Posted by Girl with Giraffes at 04:06 No comments:

The End of an Era

I guess the starting point of my journey through the Gap is an ending: after three years spent merging into campus life I am leaving, and it feels a bit like I’m losing a limb. Not just because of having to leave the campus and city where I have spent perhaps the most formative years of my life so far. Leaving behind the memories and the people is what feels like an amputation. I am constantly having to resist the urge to cling on to any stranger within arm reach and sob "It's the end of an era!"

The facts of my time here don’t make the above announcement (‘it feels a bit like I’m losing a limb…[whinewhine] amputation’) any less melodramatic. The facts are boring. The facts are: I studied BA Literature and History at the University of East Anglia for the standard three years; joined some societies and made some friends; shared a flat on campus during my first year, moved into a shared house closer to the centre of Norwich during my second and third years; went to lectures and seminars, then graduated. Like I said, the facts are boring. A list of all the things that I feel the facts miss would take far too long and has the potential to get dull very quickly. Imagine a movie montage in a rom-com, soft-focus, emotive music showcasing all the touching and hilarious moments that occur in almost everyone’s time at university and finally fading out on a group of smiling students watching the sun set over the UEA lake .

I guess my point is that I’m going to miss it, a lot. And having a lovely, comfortable and friend-filled life and routine here in Norwich is making the prospect of moving back home and embarking on the gap even less attractive.

Well, the attempt to talk about this objectively and impersonally has already failed: the realisation that I’m leaving university, and student life, for good next Saturday has finally hit. I will save myself from the embarrassment of further words and conclude with a series of highly personal, completely subjective pictures, randomly selected pictures from the hundreds of photos I’ve accumulated.  Most of them were taken by me and the one's that aren't have been attributed in the pictures properties. Cue the cheesy music... 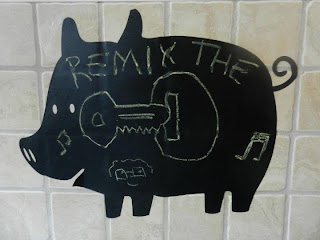 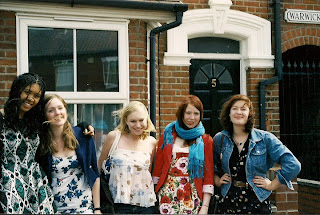 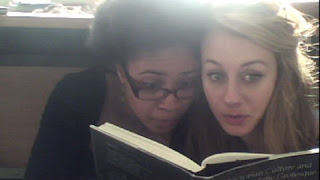 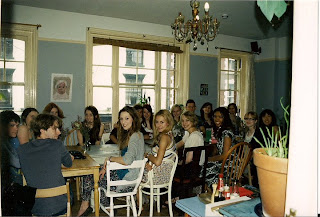 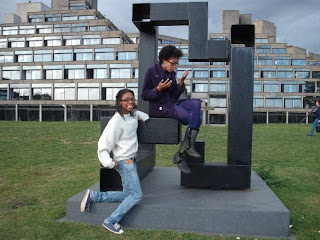 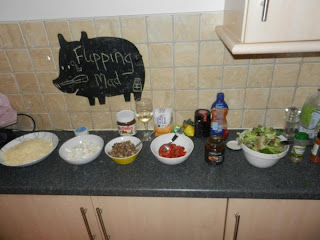 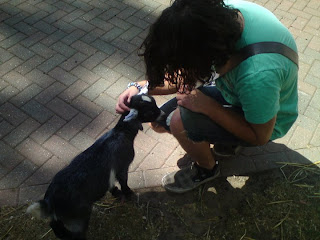 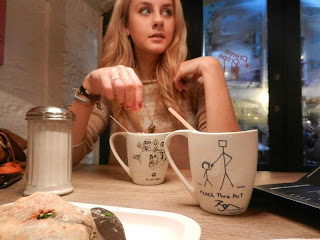 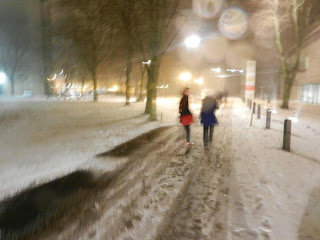 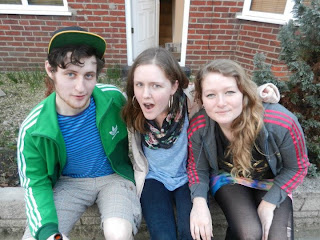 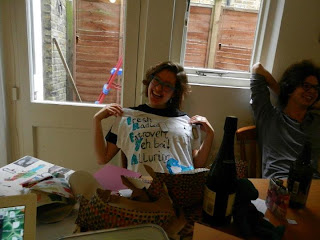 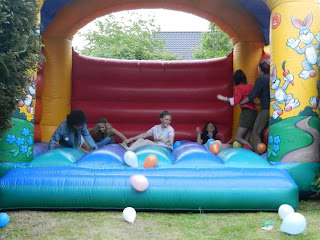 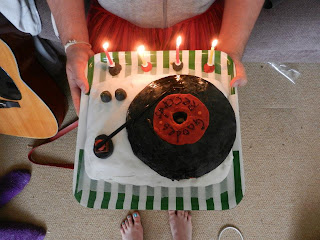 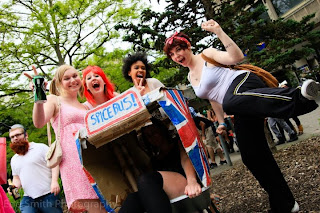 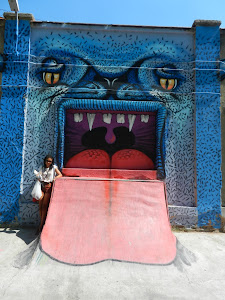